About YAMATO Origin of Japan 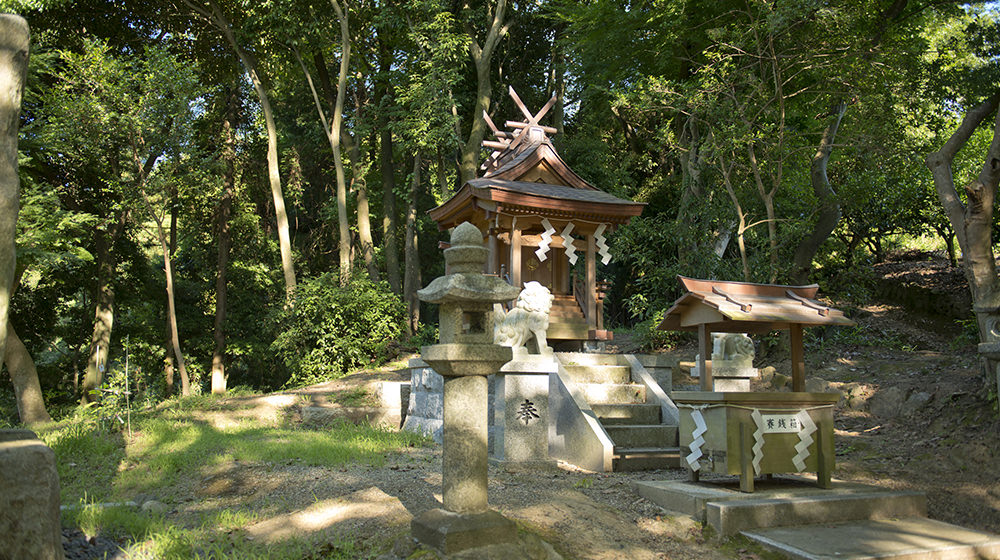 This shrine is located beside the road leading to Anashiniimasuhyozu Jinja Shrine. About 2000 years ago, Nomi no Sukune and Taima no Kehaya performed a Sumo match for Emperor Suinin. This is said to be the beginning of Sumo wrestling, the national sport of Japan. At the time, Sumo was a kicking match. It is said that Nomi no Sukune's kicks broke Taima no Kehaya's back and took his life. Nomi no Sukune is considered to be the founder of Sumo. 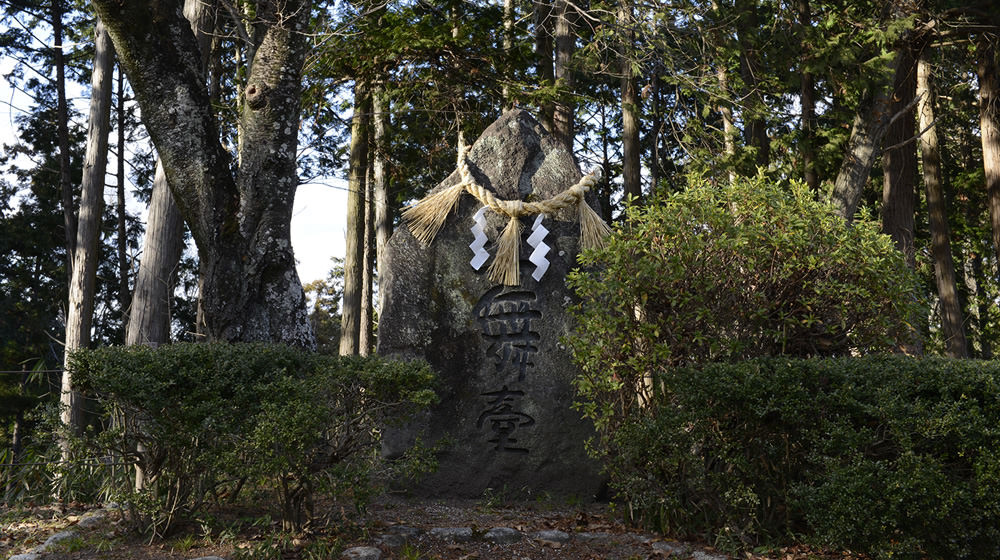 According to "Nihon Shoki", the Chronicles of Japan, the influential Prince Shotoku taught the boys how to dance the Gigaku in the year 612. Gigaku is a humorous play performed wearing masks, and was transmitted from continental China. "Tsuchibutai" was the first national theater in Japan, and was also chosen as the location for the National Theater Research Institute for the development of Japanese entertainment culture. Musical concerts and other events are still held here to honor the location's history.

After its transmission to the Tsuchibutai, Gigaku was given the protection of the court and performed mainly for aristocrats. When the protection of the court was terminated at the end of the 8th century, the performers acted at shrines, temples and street corners. It fused with the farmers' performing arts and the indigenous arts of the people, and developed into something uniquely Japanese. By the middle of the 14th century, four powerful theater companies called the "Yamato Shiza" (four groups of prominent Yamato Noh theater groups) gained popularity. The Tobi Group later formed the roots of the Hosho Style, and belonged to Tanzan Jinja Shrine. There is a monument commemorating “the birthplace of Hosho Style” at the Munakata Jinja Shrine. The parent and child team of Kanami and Zeami of the “Yuzaki Group” developed Noh into a more artistic form. Kanami incorporated music and dance into existing comedies, heightening the beauty of the art. Furthermore, Zeami created plays centered on the dead called "Mugen Noh" (Dream Noh). This style of telling the world from the viewpoint of the dead is unique to Noh Plays, and it has carried on into the present age. Noh Theater was the first in Japan to be registered as a UNESCO intangible cultural heritage in 2008. Every year in mid-May, a Noh performance is conducted on the grounds of Tanzan Jinja Shrine, a shrine treasured as the historical base of Noh founders Zeami and Kanami. Here you can experience the bygone era when Noh first came to be.

Menzuka (Monument of the birthplace of Kanze Style)

There is a legend that a mask fell from the sky. Kanami put the mask on and danced in front of the Shogun, winning popularity. Yuzaki in Kawanishi Town was Kanami's home, and where he elevated Noh Theater.

Somen, a cool and delicate food

Many foreigners are familiar with soba, udon and ramen noodles, but very few foreigners know about Somen. Somen is a white noodle made from wheat flour. It is similar to pasta, but has a lower diameter of less than 1.3mm. It is usually soaked in ice water and eaten cool. The noodles themselves do not have a flavor. One simply dips them in the sauce and enjoys the cool noodles sliding down the throat. Sometimes it is put into a hot soup just like udon. This is called “nyumen”. It is delicious whether cold or warm. It is hard to find anywhere other than Miwa, so try it out there!

Miwa, the birthplace of Somen 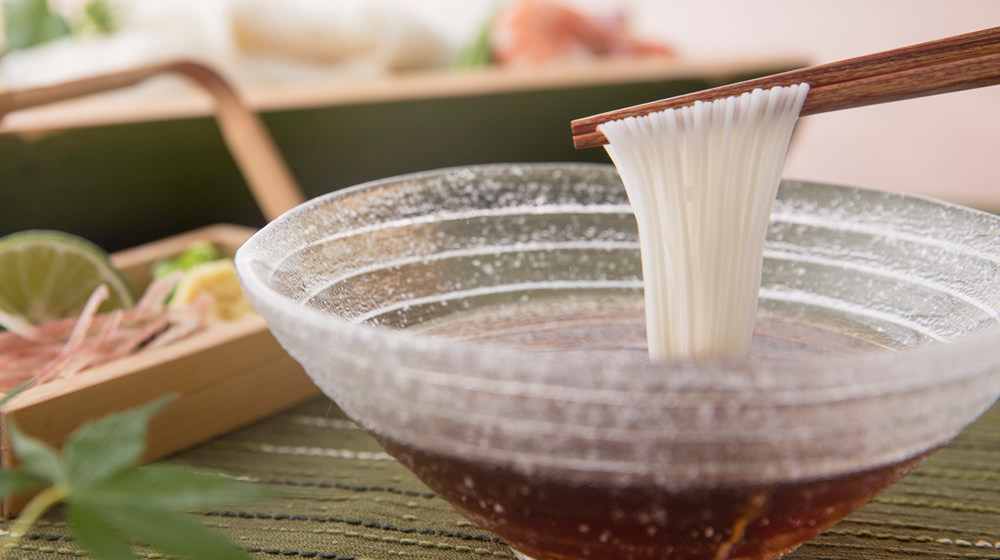 Tales from more than 1200 years ago tell us that Somen was made for the first time by a clan of Shinto priests who were the descendants of the Deity of Omiwa. The method of making Somen spread among the common people.
Somen noodles are still made with traditional manufacturing methods. Scenes of Somen drying are now renowned as a part of winter. Thinner noodles require more polished technique, and thus they are more expensive. Also, longer aging of noodles grants better texture, making aged noodles higher in quality.

During the reign of Emperor Sujin, 10th emperor of Japan (around the 3rd century), a sickness fell upon the land.
One night, Omononushi - deity of Omiwa Jinja Shrine - appeared in the troubled emperor's dreams to command him to engage in "reverential worship".
The emperor had Takahashiikuhi-no-Mikoto brew a batch of sake of the highest order, and it was then presented to the deity as an offering.
With that, the sickness abated, leaving the land in peace. Omononushi had accepted their offering of hospitality.
Owing to these events, Takahashiikuhi-no-Mikoto was enshrined as the deity of brewers at Ikuhi Jinja Shrine, an auxiliary shrine at Omiwa Jinja Shrine.
From ancient times and continuing even now, the connection between Omiwa Jinja Shrine and sake runs deep.
Sake offered to the deities is sometimes called “miwa”, and Makura kotoba (the poetic epithets used in Japanese ancient poems) for the word “miwa” is called “umazake”, meaning “delicious sake

Held every year around the time sake brewing begins across Japan, this festival offers prayers to the shrine's deity. This deity has been worshiped with reverence since ancient times as the god of brewing, and people pray for safety and security in the brewing of the new sake. Breweries and sake makers from across Japan come to attend this ceremony. At the festival, four miko ("shrine maidens") perform a kagura (sacred theatrical dance) called "Umazake-miwa-no-mai," created from a song sung when Takahashiikuhi-no-Mikoto presented the divine sake to the Emperor Sujin. Other events within the shrine grounds include exhibitions of Sake by famous breweries from across the country as well as complimentary cask sake.

The day before, the massive o-sugidama ("great cedar spheres") hanging in the outer shrine and worship hall are taken down and replaced with fresh green ones. These spheres weigh around 200 kg and measure 1.5 m in diameter, and are the symbol of the deity of brewers. After the festival, Japanese breweries and sake makers nationwide are given shirushi-no-sugidama ("marking cedar spheres," a sake brewery symbol) and red gohei (staffs decorated with strips of paper acting as talismans for safety in brewing).

The Man'yoshu is Japan's oldest book of poetry, a collection of verse composed between the 5th century and latter half of the 8th century.
Thought to have been completed after 759, it features over 4,500 works composed by people of various stations in life, from the Emperors and their nobles to minor officials and soldiers. The opening verse was composed in the Yamato region along with approximately 240 other works, and many poetic monuments can still be found in Yamato to this day. We'd like to introduce you to a few of these poetic monuments found along the Yamanobe Road.

Why do the clouds hide Mount Miwa so, that lonely threshold?
People are what they are, but how I wish clouds at the least would show their kindness.

Princess Nukata / composed in the latter half of the 7th century If I can believe there is another of you in the Yamato Province what is it that I must lament so?
There is only one of you — that is why I lament so.

Origin of Buddhism in Japan

It is said that in ancient times many diplomats and supplies from other parts of Japan and Eastern Asia would come up the Yamato River from Osaka (called Naniwanotsu at the time) and land at a wharf in what is now Kanaya, Sakurai City.
In the 6th century during the reign of Emperor Kinmei, an envoy of Paekche (an ancient Korean Kingdom) came up the river, landed in the area, and spread the teachings of Buddhism. In this era, there’s a monument where the wharf once was.Originally, the Japanese people were animists who believed in Yaoyorozu no Kami (lit., “the 8 million gods”), but after Buddhist teachings were transmitted from the continent in combination with advanced culture and writing, faith in the Buddhas as gods from distant lands spread among the nobility and the rest of the aristocracy.

According to the Nihon Shoki (“Chronicles of Japan”), Written in 1～8th century Emperor Kinmei said with joy, “I’ve never heard teachings like these before,” and asked his minsters whether or not they should accept Buddhism. One of his minsters, Soga no Iname, replied, “Buddhism is part of the advanced culture of the continent, and in the West all people pray to the Buddhas. We of Yamato (Japan) must accept these teachings.” However, Mononobe no Okoshi and Nakatomi no Kamako opposed this, saying, “If we worship the new, foreign Buddhas as gods, we will invite the anger of the gods of Japan.”
With that, the emperor bestowed Soga no Iname with a Buddhist statue and permitted Buddhist worship as a test, but the clans of Soga and Mononobe came to conflict over the issue of Buddhism. This conflict developed into a power struggle that split the political world of the time into two. In 587, Soga no Umako and his allies killed Mononobe no Moriya, eradicating the Mononobe clan and settling the issue. With the Soga clan seizing preeminence, Buddhism began to spread across the whole of Japan.